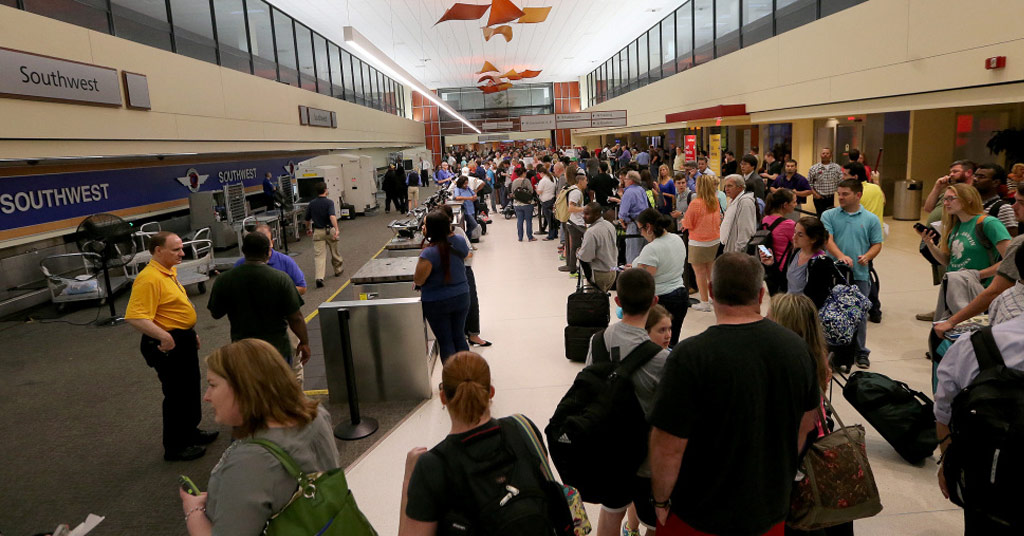 You’ve booked your ticket well in advance of the flight; you’ve scheduled meetings around your arrival time, and you’re packed and ready to go. The best-laid plans, however, can be interrupted by weather delays, mechanical problems, missing flight crew, and a host of other crazy reasons that impede your planned arrival time.

For example, on one flight I was actually the reason for a delay. Not me personally, but the seat that I was sitting in. I only had one half of a seatbelt in my seat. And I was on the aisle, so the flight attendant could see that I didn’t have my seatbelt on. Where the other half of the seatbelt went was a mystery to me and the crew, but we couldn’t leave the gate until another half-belt was located. And since the flight attendant had me stand up in the aisle so that they could search under the seat for the missing buckle, all the passengers knew that it was me who was holding up their travels. It took over 30 minutes for a replacement to be found (it was probably nabbed from another flight, so downstream delays probably followed!), and I felt the stare-downs of nearby seat-mates for a long time.

Whether the story is a canceled flight, missing luggage, or sitting on the tarmac until your butt is numb, here are some ideas for easing the pain.

If your flight is majority delayed, or even cancelled, rather than stand in line at the agent’s desk with 200 other frustrated travelers, immediately get on the phone to the airline’s customer service number. Or if you’re a member of an airline club, get to the nearest club for assistance. You’ll have a much better chance at securing a seat on another flight, as by the time you’d reach the front of the line, the last seat would have just been given out. For delays which are not weather-related (and hence not the airline’s responsibility), I’ll also ask for a meal voucher so that I can grab something to eat during the delay.

You had qualms doing it, but you checked your bag. As the last woman standing round the luggage carousel, reality hits that your bag didn’t make the flight. Get out your luggage claim check and head to the airline’s baggage office immediately. The baggage office might be able to track down where your bag is if it just missed your flight. If the bag went one way while you went another, it’ll be more difficult to track down. So fill out a claim form, keep a copy of it, and write down the employee’s name and phone number for any needed follow-up. Try to negotiate for a cash advance if you’re missing essential items that are needed immediately. Also request a kit of toothpaste, comb, etc. (fairly substandard, but when in need, take what’s offered).

For future travels, always include your itinerary of cities and hotels and place this inside your luggage (and easily findable) in the event of a misrouted bag. My mother and two aunts recently had their luggage misplaced for several days before it finally caught up with them on a two-week cruise. While they were ecstatic over finally having their bags, they spent half their vacation wearing the same sweaters and pants, had to wash out their underwear each night in the cruise ship sink, and spent precious hours in ports searching for clothing stores. An airline luggage handler once gave this valuable advice – do not book connecting flights between two different airlines. The luggage handlers of your first flight are usually not putting priority to a bag that has to be moved to another airline for your second flight. So for connecting flights, stick with the same airline. Knock on wood, I’ve been traveling for over 30 years (many of those earlier years having checked bags), and I’ve never had my luggage lost. Yes, it has showed up late a few times, and once it was ripped, but overall my success has been good.

You have a ticket, but that doesn’t mean you have a seat. Airlines routinely oversell flights to account for people who are no-shows. This can be either an awful event for you if you’re heading on a business trip with a definite schedule commitment or it could be an opportunity that you look forward in order to seize an opportunity to be compensated with future free or reduced fare tickets. You also have the right to ask for a full refund if you don’t want to accept the standard offer of a free trip in the future, but usually, you’ll need to get where you’re going, so you’ll take the next available flight. When I learn of an oversold flight possibility, I’ll immediately boot up my laptop and find out what other flights are available from my carrier as well as others. I go to the agent armed with this information, and with a pleasant mood, and the agents have always been helpful in getting me rebooked to my destination. My husband and I volunteered to stay back on an oversold flight, we asked the airline to transfer us to another major carrier’s flight which arrived only 15 minutes later than our originally scheduled flight, and we ended up with two free tickets. What a deal! Another time, NWA was offering two free tickets for every one person who volunteered to stay back on a Monday morning flight. I felt that I needed to get to work on time, so I foolishly passed on this great opportunity. I realized later that I could have worked from the airport while I awaited the next flight and handled a meeting via a conference call, and I should have taken NWA up on their offer.

For information on over-bookers, check out the Department of Transportation’s (DOT) recent reports on over sales (and flight delays and lost baggage).

These are frustrating. The flight shows as ‘Departed’, but you’re sitting on the tarmac with not-yet-activated power outlets for your electronics, no food or drink, and no bathroom access. These waits can seemingly go on forever (though hopefully no longer for hours and hours). There’s not much that can be done during the wait, except to either go to sleep or get involved in a good book or conversation with your seat-mate, but there are things that can be done afterwards. Write or email the airline’s customer service department, file a complaint with the DOT, and/or use social media to contact the airline directly. If someone is waiting on me, I’ll also set up a text message alert to be sent to them when the flight departs and lands, which can be done with FlightStats or FlightAware.

While the airlines really do strive to keep these nuisances at a minimum, they do happen. Try to keep your calm, incorporate the above ideas, and your travel nightmares will be much easier to live through.

Wishing you all on-time arrivals!